Thank you for visiting the official blog of the New York State Telecommunicator Emergency Response Taskforce(TERT)........TERT involves a comprehensive program that includes assistance to individual states in developing programs that would lead to the establishment of predetermined and selected trained teams of individuals who can be mobilized quickly and deployed to assist communications centers during disasters.......... 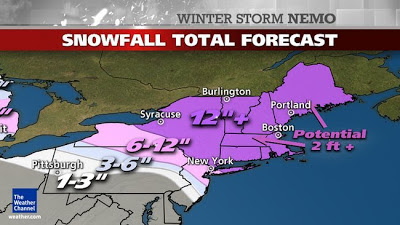 Governor Andrew M. Cuomo today declared a state of emergency as a major winter storm has already started to bring heavy snow and high winds to parts of New York State. A state of emergency mobilizes resources to local governments that otherwise are restricted to state use only and allows the Governor to suspend laws and regulations that would impede rapid response. The disaster declaration is in effect for the following counties: Bronx, Dutchess, Kings, Nassau, New York, Orange, Putnam, Queens, Richmond, Rockland, Suffolk and Westchester.

The Governor urged New Yorkers to avoid traveling and stay inside their homes until the worst of the storm has passed. Blizzard warnings remain in effect through 1:00 PM Saturday for affected areas of the state. An estimated 10-14 inches of snow is expected for New York City with areas in Long Island possibly receiving upwards of 20 inches. Wind speeds are beginning to pick up with gusts reaching 40 mph in NYC and a chance for gusts to reach near 70 mph on the forks of Long Island.

“As this winter storm unfolds, bringing heavy snow and high winds to parts of the state, I strongly urge all New Yorkers to exercise caution, avoid travel, and stay indoors,” Governor Cuomo said. “To ensure an effective and rapid response to this winter storm, I am declaring a state of emergency for counties in the lower Hudson Valley, New York City, and Long Island so resources can get to communities where they are needed as quickly as possible.”

For more information on the declaration, click on the following link:

The NY-TERT blog is administered and maintained by D. Jeremy DeMar, RPL, ENP, COML, CMCP, a Communications Response Team (CRT) Supervisor at the Emergency Communications Department, City of Rochester/County of Monroe. Jeremy is the Deputy TERT Cooordinator for the State of New York, an NJTI Certified TERT Instructor, and the Chairman of the National Joint TERT Initiative representing APCO. Click HERE to contact Jeremy by e-mail.